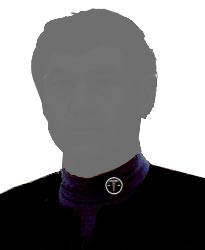 Due to IMJC security regulations it is illegal to display the actual image of a member of the Rangers.

Ranger Anthony is a twenty year veteran of the IMJC. He is currently the chief magistrate of Sector 3 (Orion Sector) based aboard the Sector Ship Caduceus.

Born on Earth in 2466 to Micah and Lorna Anthony, Luke was educated in Virginia. While growing up, he worked in the National Library as a researcher and preservationist. His major accomplishment being the conversion of the entire audio and video collection onto Antarian crystals. His time in the library instilled Luke with an insight into locating information with next to nothing to go on and a love of twentieth and twenty-first century literature and film.

He also developed a love of food and cooking while assisting his Chef de Cuisine mother at her restaurants on weekends.

Luke joined the Earth Expeditionary Forces after graduating college, became a fighter pilot and fought in the Aldebaran conflict. He joined the IMJC in 2495.

While officially single, Luke is currently engaged to Jessica Meyers of Earth.